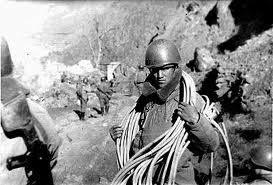 Engineer support was provided to the Soviet MRR and TRR in a number of ways. The engineer company's assets could be grouped with other regimental or divisional assets to produce Manoeuvre Support Detachments MSDs, Mobile Obstacle Detachments MODs and specfic assault river crossing support dependent on the units mission. Engineer and chemical reconnaissance would be provided in support of these functions. 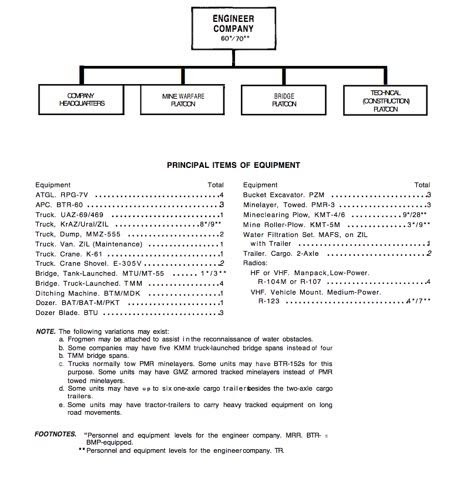 The MOD was covered in the Post on the Anti Tank Reserve and essentially consisted of minelaying capability for rapid obstacle creation in support of such groups as the anti tank reserve, and could include: 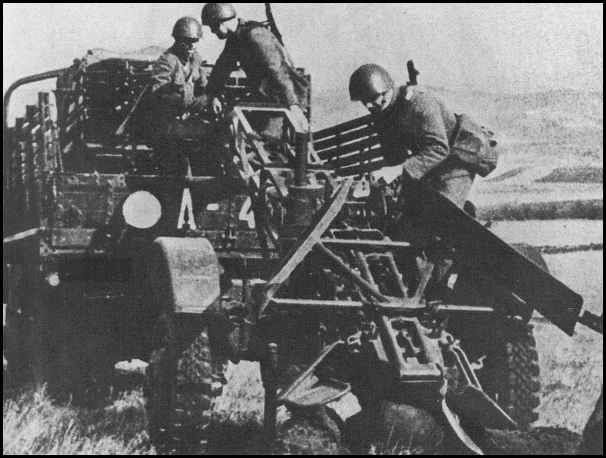 Interestingly the Soviets include the deployment of persistent chemicals as a means of channelling an enemy and the deployment of them can therefore be considered as part of the obstacle plan. The deployment of the Anti Tank reserve together with the development of obstacles would be triggered by the reconnaissance and march security elements of the unit or higher formation. At my 1:3 vehicle scale the regiment can support the creation of one MOD as can Division further groups could probably be generated from Army and Front assets. Groups would be allocated based on the priority of the mission, units acting as covering forces or dealing with flank protection of key forward detachments could receive considerable support, which makes for some interesting scenario options.

The Manoeuvre Support Detachment was responsible within the MRR for the identification, clearance/breaching and marking of obstacles on the supported units route as well as the provision of route marking capability, the maintenance of the route and an element of its own security.  The detachment would include reconnaissance, security and engineer elements. Bridging capability was limited to small gaps crossable using either truck or armoured vehicle launched bridges from within the regiments own assets. 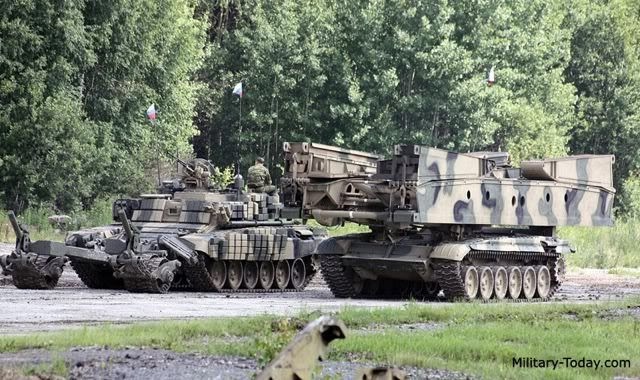 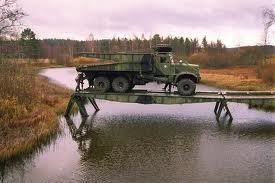 The assets that could be drawn on to form an MSB include:

So for my Wargames MSD I intend to use at 1:3 with some poetic licence to maintain each capability and introduce some interesting models:

Engineer and Chemical Recce (Reinfoirced from Division) 1 BTR 60, 2 BRDM 2Rkh (These will work forward on the main march routes with Regimental Recce and March security elements)
Mine Clearance, 3 Tanks 1 per Company with KMT 3/4/5. The KMTs can be held on trucks (1) and be issued as required to the tank companies. Additionally I'll provide MTK2 to the MSD
Route Improvement Maintainence 1 Tank with BTU Dozer
Route Marking and Security 1 BMP Company.
Bridging 1 MT 55 AVLB
1Truck mounted Sapper Platoon 6 Figures 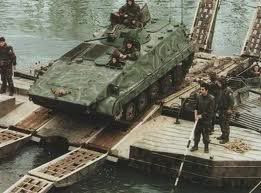 If the unit was expected to meet a significant water Obstacle then an Assault River crossing group could be provided from Divisional assets. The composition would probably vary dependent on the type of unit being supported as wheeled MRR would have a lot more trucks because of there towed artillery, particularly in the earlier organisation options. 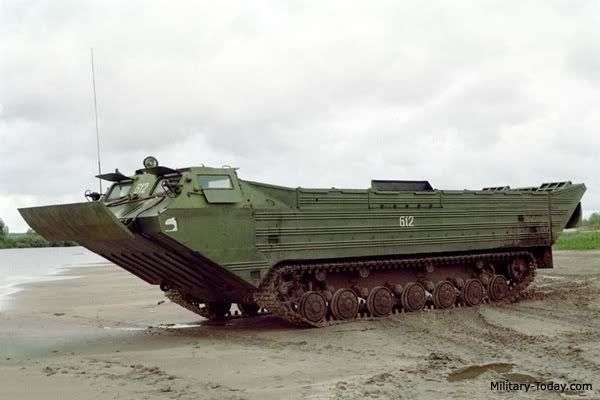 The Divisional Engineer battalion had 6 complete GSP ferrys and 12 PTS2 Tracked Amphibious Load Carriers. David Glanz in The Soviet Conduct Of Tactical Manoeuvre sugests a grouping of 3 GSP and 2 PTS, given the numbers I am going for 3 GSP and upto 6 PTS. The assault crossing assets would be grouped with units and sub units acting as forward detachments as these would be the lead element and be responsible for creating the initial crossing of water obstacles.  Deliberate bridging would most likely occur once an initial bridgehead had been established and cleared to the point where the enemy could not bring the bridging site under direct fire. 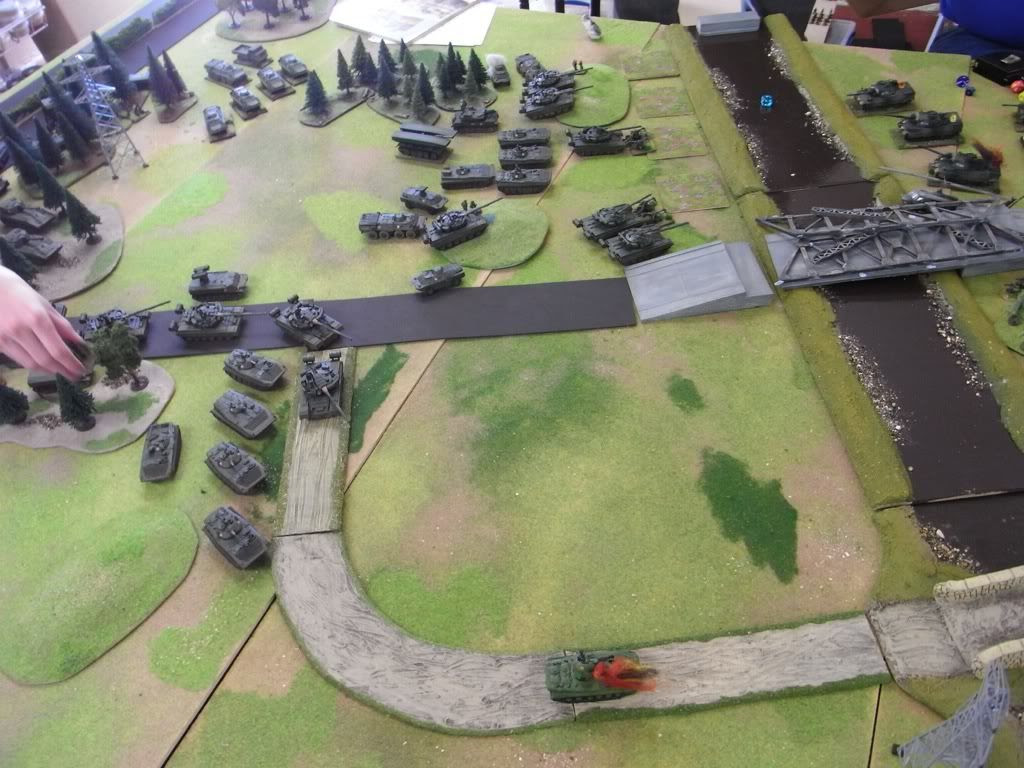 River crossings make for excellent scenarios as they allow considerable scope for task organising and could include;
I am currently working up a post which will look in detail at the force composition the TTPs and a Scenario that could be played at a few different levels. 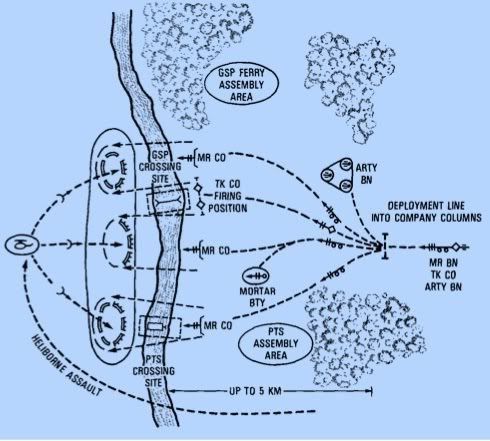 
This video gives a reasonable impression of the sequencing of an assault river crossing, sadly no GSP ferries.