The first thing to point out about what I think is a very handy little reference is that the title is a complete misnomer.  Written in 1987 the Today in the title very much refers to the Army Air Corps of yesterday and you will certainly struggle to find even a mention of the AH 64 which was a distant aspiration at the time of writing.  What the book does do well is provide a compact overview of the British Army Air Corps This includes:

This book is an excellent snap shot of the Army Air Corps at the backend of the Cold War. The Historical section is too short to do anything but provide pointers to conflicts in which the Army Air Corps had previously played a role.  The real value to the Cold War Gamer lies in less than half the book, primarily in the sections on:
The rest of the books information is useful but can be obtained easily else where, including online sources. For an out of print obscure little book it contains some very useful information. It can be picked up on Amazon, last I looked for .01p, at that price it pays for itself if you can use it to make the gaming table more stable by sticking it under one of the table legs. A thin tome but a worthwhile addition to the Cold War library if you have an interest in British aviation capability at the back end of the Cold War.

The 1 Br Corps deployment zone sits between Hanover in the North to Einbeck in the South. Deployed to the North is 1 GE Corps and to the South covering the more broken terrain of the Harz Mountains and the Saurland is 1 Be Corps.  The detail of NORTHAGs deployment was previously covered here.

The Corps area is dissected by the Rivers Weser and Leine and has the Harz mountains on its Southern boundary and the Teutoburger Wald to its rear.  The city of Hieldesheim sits in the center of the Corps area of responsibility with the ground to the south of Hieldesheim being more broken and to the North more open.  The Corps sits astride an Axis of Advance to the Ruhr industrial conurbation. 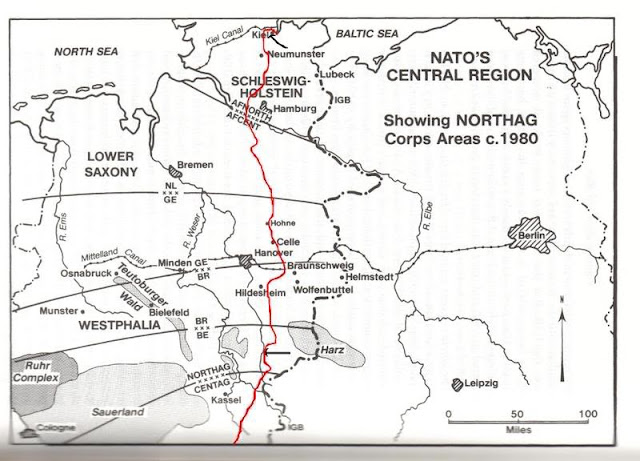 The Corps concept of operations saw a covering force fighting a delaying action from the Inner German Border back to a Main Defensive Position that sat forward of the River Weser and across the River Leine.  The covering force battle would buy time for the preparation of the MDP and potentially the deployment of units from the UK if this had not happened in transition to war.  To the rear was the reserve Division with the primary task of launching a counterstroke into the advancing Soviet Armies once the main axis of advance had been identified and this would create the conditions for a counter offensive by the NORTHAG reserve to restore the Inner German Border.

Behind the forward deployed Corps of NORTHAG sat III US Corps, once it had completed its deployment from the US it would conduct subsequent operations to restore the line of the Inner German Border.

By the close of the Cold War NORTHAG reserve included a multinational Airmobile division that included:
Over the duration of the Cold War I suspect this plan changed a number of times but this is what I intend to use as the operational context for games involving my British forces.

The Essentials of the 1 BR Corps plan were therefore:
The unifying purpose being to achieve the destruction of the first operational echelon between the R Weser and the R Leine.

UK based components would deploy during transition to war or in the opening stages of the conflict, these included.

My intent is to set a number of Scenarios within the 4th Armoured Divisions area of responsibility primarily as it had a slightly more diverse force structure than 1 Armoured Division deployed in the more open ground to the North and therefore holds a little more variety in the type of actions and forces that can be used.  19 Brigades deployment area around Bockenem is shown on the map below.

The Divisions were tailored in their task organisation to their areas of responsibility. The 4th Armoured Division included 2 Armoured Brigades and an Infantry Brigade.  The table below outlines exactly what this meant in terms of the detailed composition of the different divisions in 1 Br Corps.

The Unit composition and equipment distribution of the Combat and Combat Support units around 1988/89 were as follows:

The Divisions operational concept had the Armoured Brigade and the Armoured Recce Regiment deployed forward as a covering force. The Armoured Recce Regiment being initially under command of 1 Br Corps as a component of the Corps covering force.  The 2 Mechanised Brigades then developed and manned the Main Defensive Position with the covering force withdrawing back into reserve where it would be reconstituted by replacement crews and vehicles from the Armoured Delivery Regiment. The AAC regiment would take a very active role in counter penetration as the ground lent itself well to HELARM anti tank ambushes. I expect it would have been active in both the divisions covering force battle and the MDP battles.

19 Brigade the Mech (W) Brigade would deploy in the North of the area around the Bockenem bowel at the entrance to the Sibbessa gap and 11 Brigade, the Mech (T) Brigade to the South around Bad Gandershiem and Seesen. 20 Brigade would provide both the covering force and the reserve.


Confrontation, The Strategic Geography of NATO and the Warsaw Pact
Armies of NATO's Central Front
The Royal Armoured Corps in The Cold War
Encyclopedia of the Modern British Army
The British Army in Germany, an Organisational History 1947 - 20
British Army of the Rhine,  TJ Gander
The Royal Engineers, TJ Gander
Iron Division, The History of the 3rd Division 1809-1989

Other Posts of Interest: