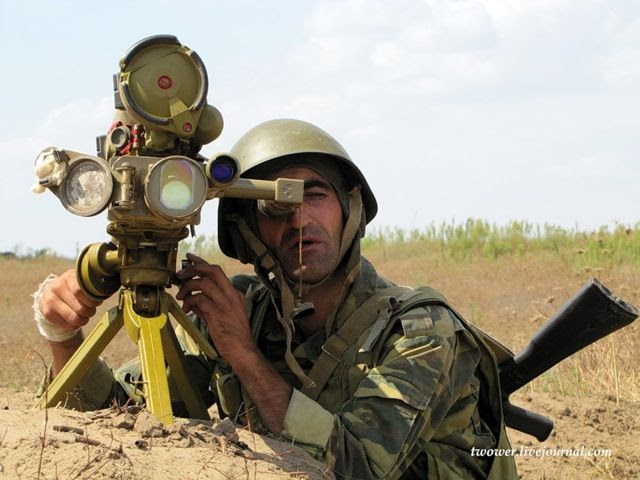 For the final post of 2012 I thought I'd cover the conversion and scratch building of an AT7 Saxhorn using figures from Elhiems Iraqi AT4.  The AT7 was initially introduced into Motor Rifle and Air Assault units at the end of the 1970s beginning of the 1980s,  The system was man portable and could engage targets out to a range of 1000m.  3 AT7s were issued to the weapons sections of BTR companies and Air Assault Infantry Companies along with 3 PKM GPMGs.  It is unlikely that all units scaled for the equipment had received it by the end of the cold war, I suspect but don't know that priority would be with air assault trained Motor Rifle elements as this was where the most utility was likely to be derived.  By the 1990s the Soviets had started to introduce the AT13 which was heavier and had a longer range, 2000m. 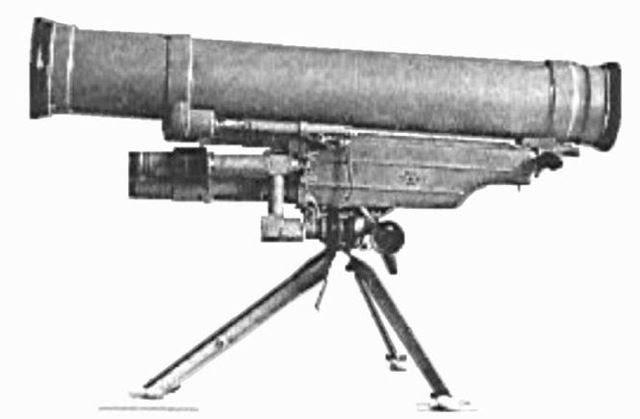 Whilst Underfire Miniatures make a AT14 it is sold as part of a set which includes an 82mm Morter and the figure is more modern than I was after.  I decided to use Elhiems Iraqi AT4 as at the time Matt had not produced a Soviet crewed version, the bonus from this approach is it also provided a "spare" AT4 Launcher which I used to convert ACE BMP 1s to BMP 1Ps.  As supplied the product looks like this. 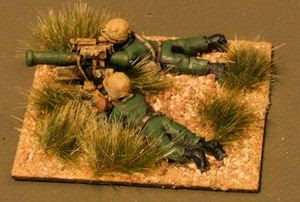 Figures are in chest webbing with map pockets on pants and M1 Helmets, tripod for AT4 is visually different to AT7 as can be seen in the immage below. 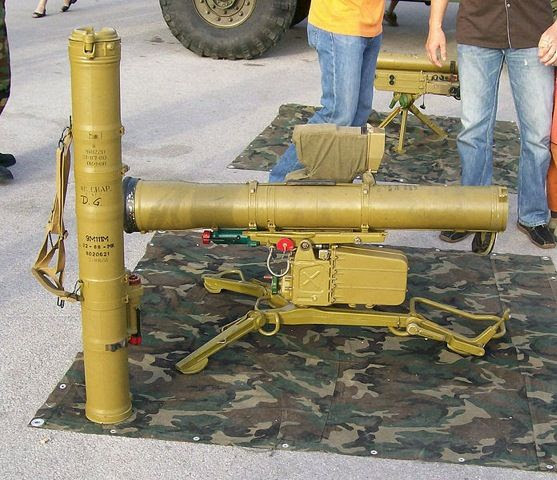 Basic steps for this activity were: 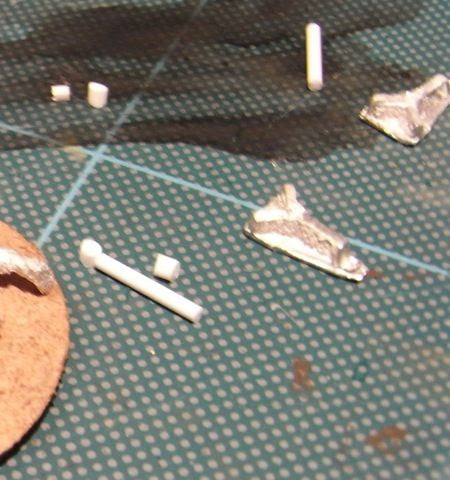 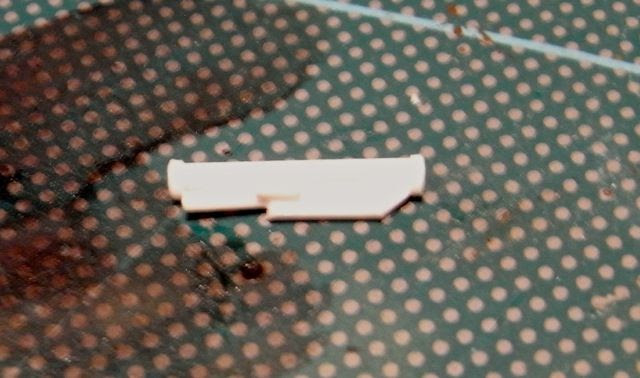 The launcher was built from a plastic rod with a larger diameter rod sliced and joined to produce the ends, a piece of plastic strip of appropriate length and with one corner chamfered was stuck below the launch tube and finally a smaller diameter piece of rod was attached under the launch tube to represent the site.  The launcher was then attached to the amended tripod using green stuff. 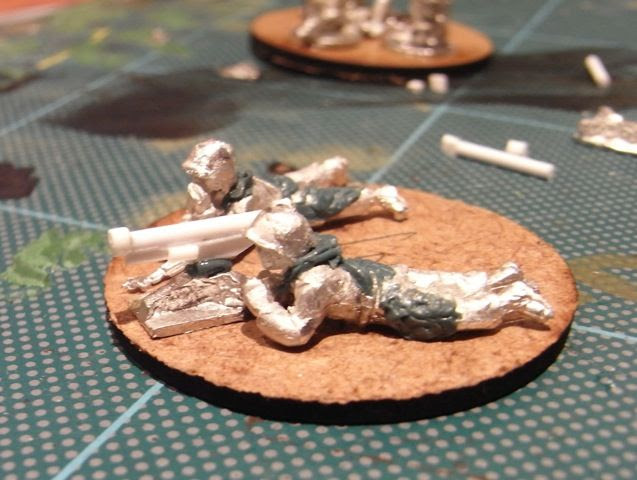 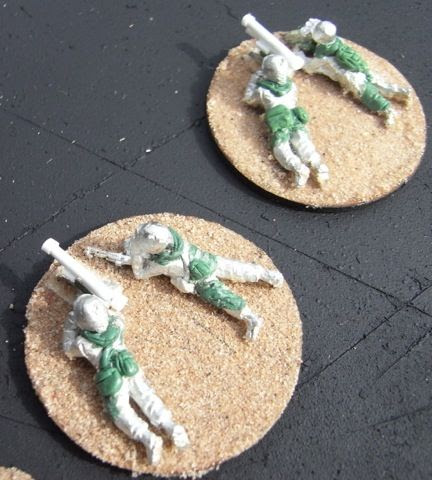 The crew had their patch pockets removed and were then attached to the bases before being worked on with green stuff, the uniforms were amended first thickening the legs and waist and adding a hood, once this was dry some additional webbing elements were added also fashioned from green stuff. 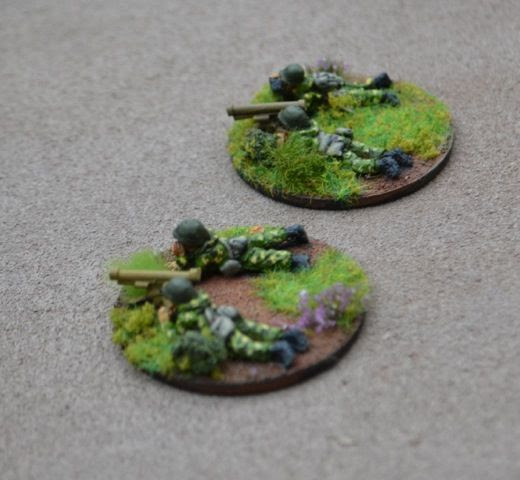 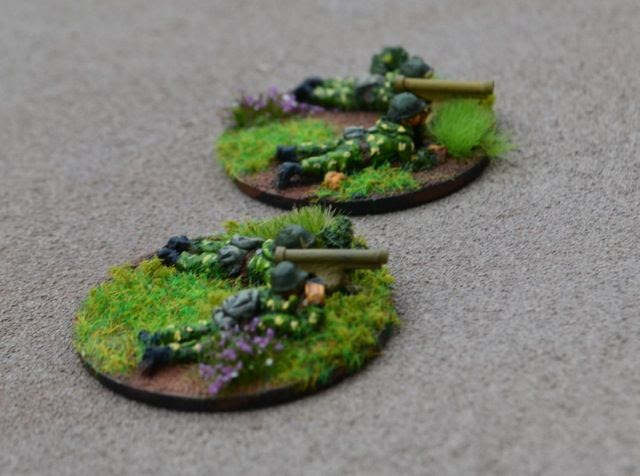 The Figures were painted in "Sun Bunnies" in line with all my Motor Rifle and Airborn/Air Assault troops.  Vallejo Olive Green 967 for the base colour, with the Camouflage patches in buff 976, the weapons were a mix of black grey and 977 Desert Yellow in an attempt at the mustard colour of the equipment shown in the photos at the top.  Bases are laser cut MDF covered in sand and white glue then painted GW Calthan Brown, highlighted with desert yellow before having a variety of scatter materials added. 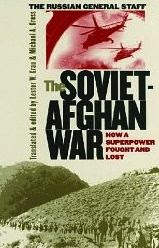 How a Super Power Fought and Lost


A superb book on the Soviet Afghan War up there with the Bear went over The Mountain.  It is also another translation from original works by the Soviet Genreral Staff, this time a collection of papers based on their analysis of the armies performance over its extended deployment in Afghanistan. As such it provides a degree of analysis and overview beyond that provided in the Bear went over the Mountain and the Other Side of the Mountain.

Whilst it covers the General background to the war and the organisation and equipment of the Mujahideen, its real value lies in the Chapters on Operational Art, Combined Arms Tactics, Combat Arms Branch Tactics, Combat Support and Combat Service Support.

My Interest Lies mostly on the Central Front and my main interest sits in what the Soviets learned and started to apply to wider conflicts. Whilst the book can be read cover to cover I have mostly been dipping into selected chapters those on combined arms tactics and combat arms branch tactics offer considerable read across to the central front, particularly with regard to the employment of Air Assault and aviation assets.  In particular the detail on the co-ordination of activities between the different arms in the conduct of a mission along with the general level of task organisation that occurred is illuminating.  The Chapter on Operational Art provides an indication of how the Soviets intended to fight a war in central europe which adds in those components missing from similar expositions that focus on WW2 examples, in short it portrays an approach to war that was never likely to be successful against the Mujahideen but one that may have lead to some interesting outcomes if it had played out on the North German plain.

Lester Grau adds commentary at the end of each chapter which I found very useful often highlighting the issues presented by the differences between the war the Soviet Army was designed to fight rather than the one it was called upon to fight.  If your interested in the Soviet Afghan war its an excellent read, if your interested in the Cold War in general and war on the Central Front it is an extremely useful text on the organisation, operation and thinking that drove the Soviet War Machine.


The Soviet-Afghan War: How a Superpower Fought and Lost (Modern War Studies) 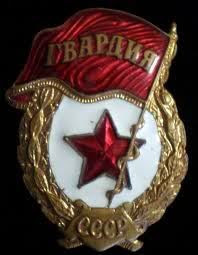 I got interested in Soviet Military Unit titles and abbreviations when reading the 16 Air Army Web site and whilst extending my research into the evolution of the organisation and structure of Soviet helicopter units.  There are a couple of good aviation sites which have taken Soviet Unit Titles and provided a mapping between the Cyrillic Title & abbreviation to its transliterated latin equivalents and  the translation of the title.  The Dutch Aviation Societies Scramble web site has a particularly useful table which does this for aviation units of all Soviet armed forces.

Whilst there are Sites for Soviet Army unit titles and abbreviations in Russian I have yet to find anything as useful as Scramble the one I have found has a number of problems:

The table below is my starter for 10 which I am pretty sure is neither comprehensive or absolutely correct, but its a reasonable start. It covers Tank, Motor Rifle, Engineer, Artillery, Reconnaissance, Anti Aircraft and Anti Tank Units. I'll probably add aviation when I have managed to work out what's relevant.


Whilst I have included the battery concept within artillery I have yet to find strong evidence that this is not just a western construct, the other component I am not clear on is the appropriate ending of the Arm of Service title that should precede the different unit size types, I have followed the patterns found on the WW2 listings.

Other than including Soviet style names and abbreviations in your blog and scenarios  you can also use the Cyrilic words in search terms, this provides access to Russian published sources and theres a lot of good information about the cold war and a lot of images of Soviet equipment that can be accessed in this way.